Aboriginal and Torres Strait Islander viewers are warned that this website may contain images of deceased persons.

The Red Dust story dates back to youth work commenced by our founder, John Van Groningen in the Aboriginal community of Lajamanu in 1984.

At that time, basketball competitions were organised for weeknights and specified weekends to coincide with his time off as a Commercial Pilot based in Lajamanu.

Between 1984 and 1990 John attended the Yuendumu Sports Festival which was usually held in the last week of July. He played both basketball and footy with the Lajamanu Wampana teams which is where he began to understand the important role sport played in remote communities.

In 1993, John and the Geelong Supercats NBL team delivered our first healthy lifestyle session in the remote community schools of Yuendumu and Mt Barker.

Over the next four years, regular healthy lifestyle sessions were delivered with the support of basketball players from the NBL and other competitions.

John's pioneering efforts with athletes as role models continued to build momentum with the help of volunteers from three mainstream sports - basketball, AFL and athletics. By 1996 John was leading healthy lifestyle sessions either annually or twice-annually in remote communities.

During these early years everyone was a volunteer and no money was paid for time or as salaries.

John reached a new milestone in 2006 with the establishment of Red Dust Role Models.

John passed away in 2012 after a battle with cancer. His legacy lives on in Red Dust today, and we have continued to work together to enrich lives, improve health and strengthen the future of Indigenous youth and families.

Today, we invite you to join us as we build on this legacy. 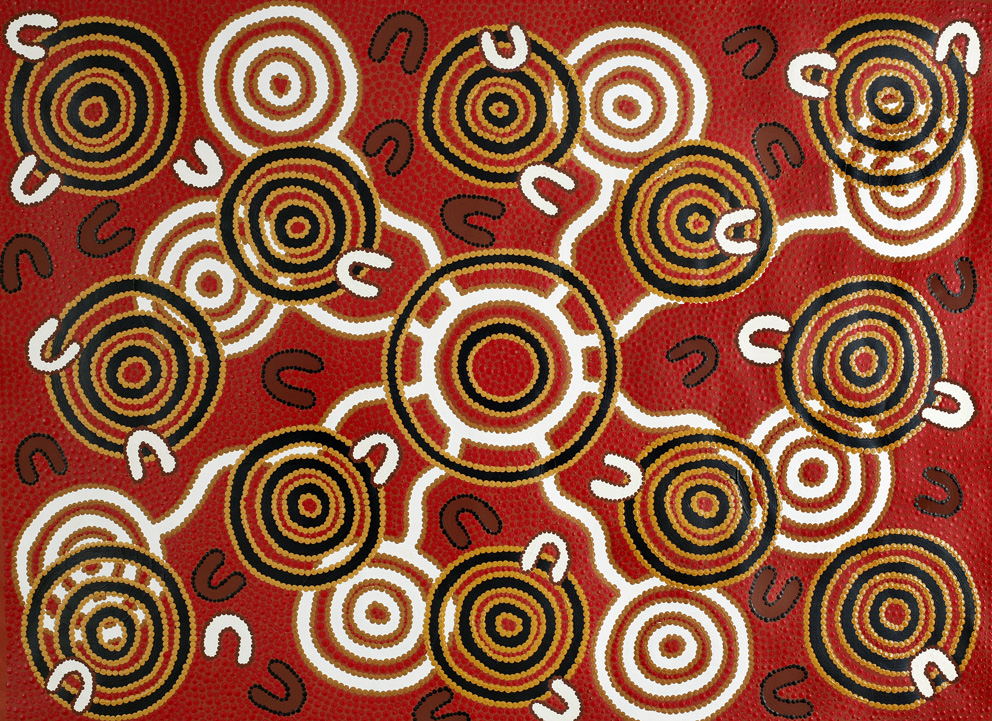 'Walking Forward Together' was created especially for Red Dust by Raymond Walters Penangke, an immensely talented artist and role model. "My initial thought when creating my painting was the understanding of Red Dust has of the complexities of remote Aboriginal community lifestyle. I could see this understanding was embedded and grew from the leadership and knowledge shared by senior members of Red Dust.

From my observation, it was evident that respect for community people and community ways is an important criterion for role models visiting remote areas. It was important for me to share this when doing the painting.

In the painting you will see the twelve black circles with yellow ochre dots hovering on the top. These circles represent communities. Lines do not connect these communities because it's important to understand that whilst communities have similar values in cultural and lifestyle practices, the languages and traditional stories are quite unique to that region. Too often one brush is used to paint all communities and Aboriginal people. I am proud to say that this is not the case with Red Dust.

I then thought about the strengths of Red Dust and how it achieves positive outcomes consistently. It was obvious the energy and passion that goes into working with the children in their classes and the involvement with community activities and members were key components.

The eight white circles represent organisations, partners and communities of the role models that support and work with Red Dust. It signifies the importance of grassroots-level development and the success of this approach. The lines represent the travel needed to produce the results achieved by Red Dust.

To provide a culturally appropriate program and achieve open communication, respect is required, which the three circles in the middle represent. The two black circles represent the community councils, Aboriginal organisations and Aboriginal people working with Red Dust. The white circle represents Red Dust offices. The red dots represent the red dust of the central outback and the U's are non-Indigenous and Indigenous people working together.